Apollo Missions to the Moon 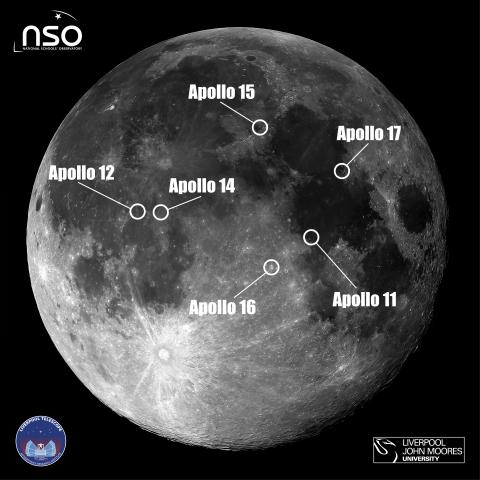 Have a go at imaging the landing sites of all the Apollo missions!

Use the image of the Apollo landing sites to the left to guide you when observing with the Liverpool Telescope. If you have the time then try and observe all six landing sites!

When you visit Go Observing and specify the Moon, the options to observe specific segments will be available to you.

If you want to know a little more about the landing sites, then read below!

The crew landed in the Ocean of Storms, the second manned lunar surface mission, where they were tasked with an extensive series of exploring the lunar surface using the lunar module crew. The mission also deployed ALSEP; the Apollo Lunar Surface Experiments Package, with the aim of gathering scientific data from the Moon's surface such as seismic activity.

Apollo 14 landed within very close proximity to that of Apollo 12 and the ALSEP package in Fra Mauro. During this mission, crew members collected more lunar surface data and samples; they brought back to Earth 94 pounds (42.5kg) of rocks and soil for scientists across the World to analyse. The crew also set up the second ALSEP.

The fourth manned lunar mission for NASA in the space of two years. The module landed this time in the Hadley-Apennine region, north-east of the previous two manned missions. The mission consisted of more lunar surface science, lunar orbital science and looking for ways to advance the engineering-operational side of lunar missions. The third ALSEP package was deployed on this mission.

Mission location: the Descartes region, due South past the lunar equator from the Apollo 15 landing site; chosen for the sampling of two 'volcanic contructional units' of the highland lunar areas. Here, another ALSEP package (the fourth) was deployed. This mission, amongst many things, was used to assess the manoeuvrability of the lunar rover through a series of "Grand Prix" exercises: S-turns, hairpin turns and hard stops.

The last time that a manned mission landed on the Moon - even to this day! The mission location was the Taurus-Littrow highlands and valley region. The site was picked because of the variance in age for lunar rocks (to be brought back as samples). Yet another ALSEP package was deployed on this mission, albeit with new equipment for heat flow experiments, lunar seismic profiling, local gravitational measuring (using a lunar surface gravimeter) and others.

Now that you know more about the areas, observe them using Go Observing!