The Image of the Month for May 2017 is one of the most famous and stunning objects which the Liverpool Telescope can observe, Messier 27, or the Dumbbell Nebula.

This is a wonderful example of a planetary nebula, one of the final phases of a low mass stars lifetime. Indeed in around 4.5 billion years our own Sun may look something like this, as it completes it red giant phase, where the star expands, burning any fuel remaining in it's outer layers, before it finally runs dry. The star then collapses down gradually to form a white dwarf (which can be seen in the centre of the Dumbbell nebula), and all of the material being lost from the star surrounds it before drifting off into space, producing these spectacular objects.

An interesting quirk of this particular set of 3-colour observations of M27 is that whilst the 'Green' (V-band filter) was exposing, a satellite went through the corner of the image leaving a trail of light, but it moved so quickly that it wasn't seen on either of the other colour observations used to create this image. 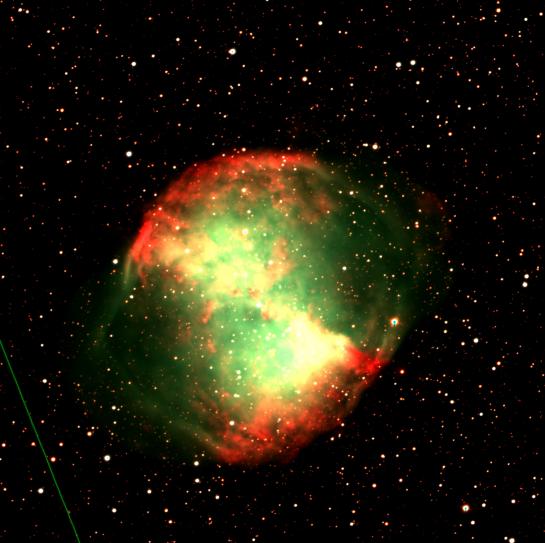