Our Image of the Month for May is the cosmic beauty which is Stephan's Quintet: a group of five galaxies located in the constellation Pegasus. The name 'Stephan's Quintet' comes from the compact galaxy groups' discovery in 1877 by French astronomer Édouard Stephan at the Marseille Observatory.

Despite looking extremely clustered together, there is a slight illusion regarding how close the respective galaxies are in the image. Starting from bottom left, NGC 7320 is a foreground dwarf galaxy much closer to Earth (roughly seven times closer) than its cluster counterparts...but being a dwarf galaxy and lying at a distance much closer to Earth gives the impression that NGC 7320 is a similar size to its cluster counterparts and is relatively close to them. We can also see that NGC 7320 lies closer to us as it is slightly more resolved than the other galaxies in the image - with some clear dust regions in the spiral arms which have active bursts of star formation. At top left we have NGC 7319, a heavily barred (type SBbc) spiral galaxy whose spiral arms (seen faintly on the image) curve almost all the way back around to the opposite edge. Next we have the two colliding/merging galaxies, NGC 7318A and NGC 7318B. Although it may not be evident in this image, the two galaxies colliding will induce very rapid and intense bursts of star formation due to the high-impact collision between the gas and dust in the respective galaxies. Last but not least, in the lower right of the image we have NGC 7317, a relatively normal elliptical - type E4 - galaxy. 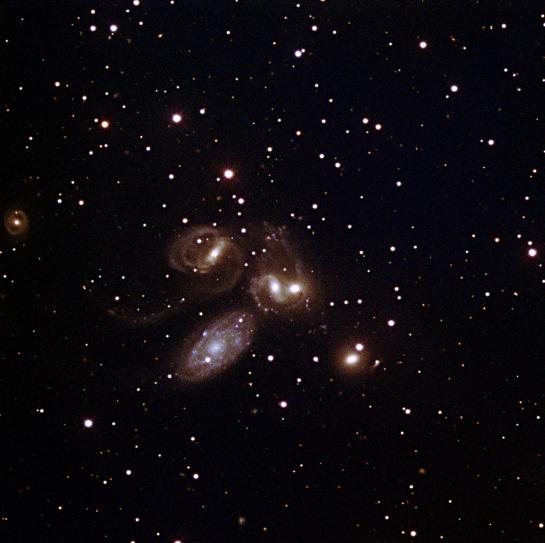