October's Image of the Month goes to Utkarsh Mishra and his beautiful process of ARP 273 - a pair of interacting galaxies engaged in a stunning cosmic dance.

The pair of galaxies are located over 300 million light years away in the Andromeda constellation. Some have speculated that they represent what may, one day, become of our galaxy (the Milky Way) and our closest galactic neighbour, Andromeda as they slowly cruise towards each through the cosmos and will eventually collide.

Interestingly, although interactions such as these look and are described as violent, colliding galaxies do not bring about hugely catastrophic consequences on small scales. Analogous to an atom, most of the content within a galaxy is actually empty space - one only needs to consider our own Solar System to understand why such a vast amount of space comparative to a small amount of mass, but enough gravitational pull would keep a system stable/in equilibrium. Therefore when galaxies collide the chances of anything physically coming into contact with anything else is extremely rare! The main source of disturbance and what contorts the shapes of these galaxies are dynamical and gravitational interactions; dynamical interactions are caused by the different shapes, rotations and gas/drag between galaxies, when gravitational interactions are what it says on the tin - interactions between the not-negligible amounts of mass in the galaxies gravitationally attracting each other.

What galaxy interactions do give rise to, however, is vast amounts of star formation. The dynamical interactions between the gas and dust of colliding galaxies provides enough energy, compression and friction/drag for gas and dust clouds to collapse in many places, so many new stars are born from this energy. 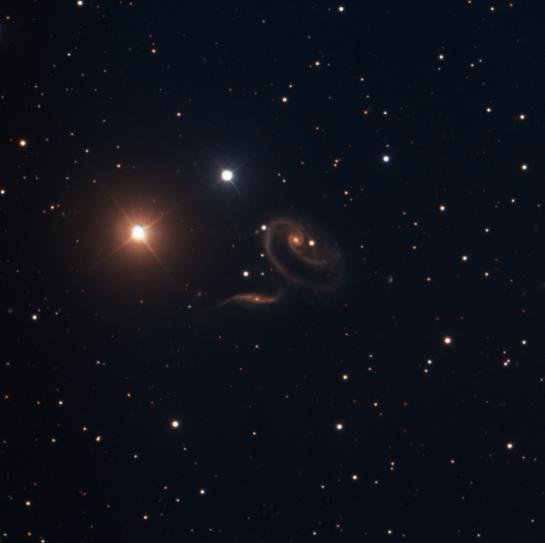